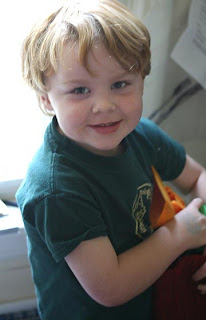 So graffiti artist have a wonderful creative approach to their "tags" aka signatures. They use these stylized tags so that they can be identified but not really identified because after all graffiti is illegal - I'll have to say after sam and Dara left from their most recent visit we discovered that maybe Sam needs to study more closely the nuance of obfuscation used by these artist as his work was very easily identified - 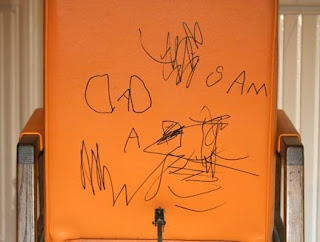 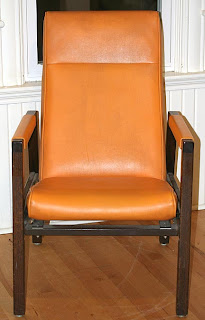 Posted by Clare Carver at 7:15 PM 4 comments: Links to this post

I had the absolute pleasure of sitting on the road side just down the road from my place for about 10 min this afternoon and communed with this herd! The photos don't do them justice there where about 35 elk and lots of young ones they where about 100 yards away from the road! so majestic. 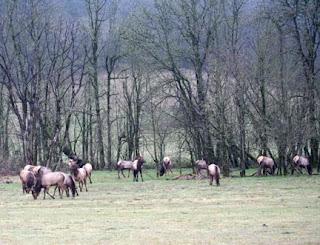 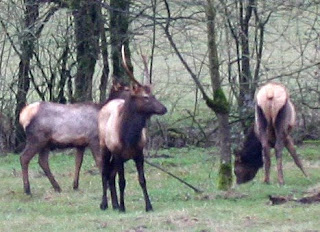 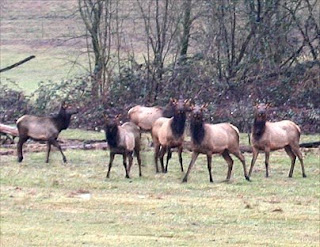 Posted by Clare Carver at 6:12 PM No comments: Links to this post

It's been about year long process and it's finally done - now we have a an official US trademark on the Big Table name we are registered as doing business under that name for selling meat eggs and wine beginning in 2008! yippee - it's nice to feel officially done (for now at least) with all our paperwork for all the trademark stuff.

Big Table Farm is a Licensed and Bonded Winery in Oregon and with the Feds and NOW has a trademark!! whew I'm sooo done with paperwork for a little while!
Posted by Clare Carver at 11:43 AM 1 comment: Links to this post 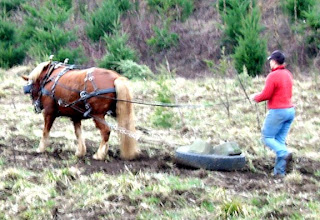 Duane and Sarah Van Dyke of One Mile Shires came out yesterday to help me out with Hummer - Sarah had come out a few weeks ago and we did some work with him and Duane gave me a new bit as hummer wasn't listening very well to the old one - so Dunae and Sarah helped me to get hummers harness and bit even more dialed in and gave me more lessons with hummer and little by little I'm getting more confident with driving! They have been great friends and mentors to me. Today I went back out and drove Hummer out in the back field with the training tire we worked slowly and peacefully and I felt like really good about it when we where done - Slowly but surly I feel like I'm making progress t

owards working my horses on the farm - 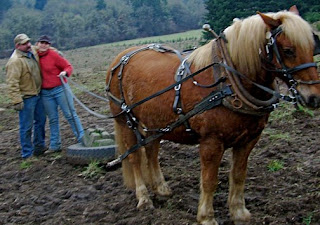 Thanks for the photos Sarah! : ) 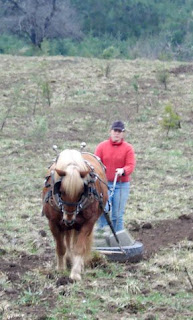 Posted by Clare Carver at 1:58 PM 2 comments: Links to this post

Went to Portland Last night with some new friends from Square Peg Farm and Gaining Ground Farm - they where on the Slow Food Terra Madre Italy trip and where speaking last night about the convention and there trip. It was a very interisting evening I'm learnign so much and finding the food comunity in Portland is very close knit - it was really neat to experience. After the talks the 4 of us went out to Park Kitchen with Scott (owner/Chef) and had an amazing feast! Thank you Scott - That dinner was so enriching on all levels - I was in full learning mode although I'm know I talked more than I should have - a bunch of super knowledgeable farmers/food advocates and a restaurant owner talking about farmers markets, farm tax status, grain prices, greens in winter, the snow, growing stuff, delivery animals, where to buy baby chicks, cured meats, and hearding cats it's was all out there - man that was quite the evening! I feel so luck y to have landing here in Portland with such a great community. Thanks for welcoming me in!
Posted by Clare Carver at 10:33 AM 1 comment: Links to this post 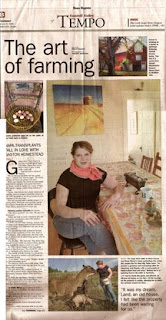 The McMinnville paper the News Register did an article on me, art and the farm it was written by Molly Walker and Chrissy Ragulsky took some really beautiful photographs! Thank you both for a very nice job! I've gotten lots of response from folks with barns which is great! 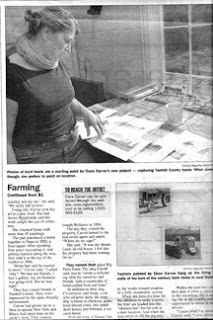 here's he article - Edward's photo also got repeated on the front page!! I love it my lama's now famous : ) ok maybe not 'famouse' but published - 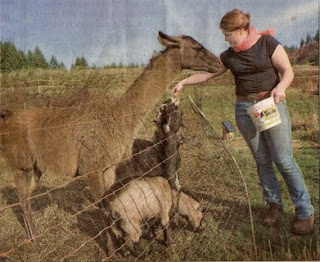 Gaston artist Clare Carver is looking for a few good barns. Old barns. Barns that would have a story to tell, if only walls could talk.

And she feels a sense of urgency.

"If you have an old barn that has a great story - contact me," Carver urges. "It's really sad that old barns are going to be lost."

While she realizes the march of time means many will be replaced with metal structures, she dearly wants to capture the stories of Yamhill County's aging wooden barns before it's too late.

Carver, who focuses her artistic talent on oil painting, plans to create a local barn series to sell. And she plans to use the proceeds on construction of her own barn.

She had success with a similar project - a tractor series. Proceeds went toward a tractor for a Gaston farm that she and her husband, Brian Marcy, purchased two years ago.

While she took an early interest in oils, she also spent considerable time with acrylics, which are less costly.

Carver, who has eight siblings, already had 10 years of art studies under her belt when she entered college. Ann Balbirnie was one of her early mentors.

She attended the Tyler School of Art and Pennsylvania Academy of Fine Arts, both in Philadelphia. After graduation, she took a job as art director for an advertising agency, also in Philadelphia.

She recalled, "My dad said, 'Stay there long enough to learn what you need to learn, but not long enough for them to steal your soul.'"

In 1996, Carver bought a one-way plane ticket to San Francisco. She had $250, a bicycle, a backpack and a trunk to her name.

She stayed with the brother of a friend initially, but quickly landed a job and found an apartment to rent.

The dot-com boom was in full swing. That enabled her to find work that was both fun and financially rewarding.

The pay offered her a chance to travel. A shelf full of sketch books depict scenes from Botswana, Tanzania, Kenya, Peru and Paraguay.

In 1999, she met Marcy through a mutual friend. A winemaker, he lived in Napa.

Like Carver, he was an avid cyclist. Their first date was a cycle ride.

In 2000, Marcy got a chance to work a grape harvest in Australia. He asked Carver to join him.

She knew she wouldn't be able to pursue graphic design in the land down under. But she agreed to go if Marcy would cover her room and board.

For four months, Carver focused on her painting.

"It was a really important time in our relationship and my art," she said. "We really fell in love."

Using oils, Carver took her art to a new level. She had shows in Adelaide, and her work caught the eye of collectors.

She returned home with more than 45 paintings.

The pair purchased a home together in Napa in 2002, a fixer-upper. After spending four years renovating it, and getting married along the way, they sold it at the top of the market in 2006.

"Brian had said he wanted to move," Carver said. "I asked 'why?' We had our friends, I had a gallery, my art business was going well. But he was right."

They had visited friends in Yamhill County. They were impressed by the open, friendly environment.

Carver had grown up on a farm in upstate New York and Marcy had spent time on his uncle's farm. They contemplated picking up some acreage of their own.

The couple located a 70-acre farm in a rural area near Gaston. Part of the Williams family's original homestead, it featured a farmhouse built by Joseph Williams in 1890.

The day they visited the property, Carver turned to the real estate agent and asked, "Where do we sign?"

She said, "It was my dream. Land, an old house. I felt like the property had been waiting for us."

They named their place Big Table Farm. The idea, Carver said, was to "create a welcoming table for ourselves and friends, with a cornucopia of hand-crafted food and wine."

In addition to their dog, Clementine, and Andy, a cat who adopted them, the property is home to chickens, goats, Irish Dexter cows, two small draft horses and Edward, a rescued llama.

With the help of Duane Van Dyke of Yamhill, Carver is learning how to plow with the horses. She sees them helping her create future gardens.

Carver has some interesting apparatus to help rotate the livestock around the property, as she works toward creation of a fully sustainable system.

When she feels it's time for the chickens to make a move, the fowl are loaded into the "chicken bus" for the trek to a new location. And when the pigs arrive to fill the pig pen, they will get a chance to make their rotations in the "Pigabego."

The couple are creating their fences out of moveable "hot tape," which relies on solar power.

Within the next two years, they plan to plant a vineyard. In the meantime, she is enjoying life in the country and the opportunity to invest in her artistry.

"I paint what I'm around, Carver said. "I love landscapes and plein air," she said.

From an artistic perspective, the location is perfect.

"It's aesthetically awesome," she said. "It's peaceful. It's a great environment for working."

Posted by Clare Carver at 7:59 PM 9 comments: Links to this post 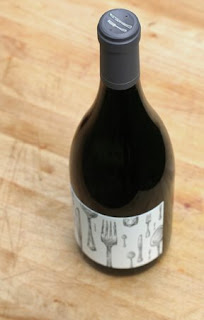 With the new year - I wanted to take a moment to thank all the restaurants and shops that have supported Big Table Farm by selling our wine and buying our farm products. Your enthusiastic support of our work means so much to us. Thank You. We encourage all you locals to go in sit down have a bite to eat and buy a bottle of vino.

There is an order form on our site and we deliver in the Portland area and can ship wine to you in OR, CA and Washington! 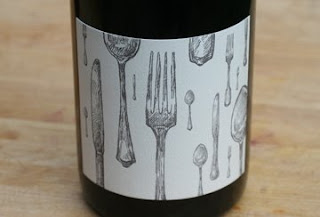 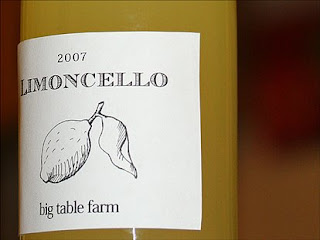 Many of you have enjoyed Brian's Limoncello - Limoncello takes a lot of lemons and thankfully Joseph has just sent us 20#'s of gorgeous lemons - Thank you Joseph not only did these inspire Brian to start more limoncello but inspired me to paint : ) 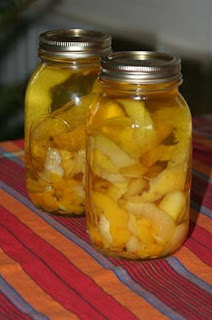 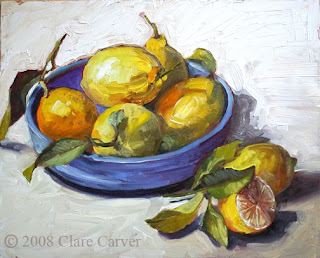 Posted by Clare Carver at 10:09 PM 4 comments: Links to this post

Darn you Lynne Rossetto Kasper! if any of you are junkies of the 'splendid table' radio show like my husband you may have hear the following recipe for 5 min artisan bread - which let me tell you is stupid simple and really freggin good - the bad part is brian makes it almost every single stinking night and I'm REALLY trying to not eat too much flour based food like _ BREAD!! I know I know poor clare - but really too much of a good thing is well too much - so I guess I just have to keep practicing restraint! darn it - 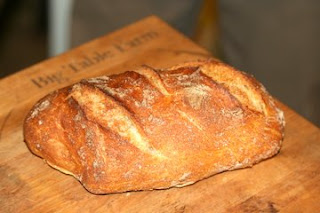 In other news the chickens are starting to lay a little bit more and I'm not loosing money any more at the darkest winter day I was literally loosing money as I feed $22 dollar a bag organic grain to my girls (yes 3x's the price of the non-organic stuff!!) so if the laying slows down or stops it's a little painful - so when you see those organic prices we're not gouging you I promise it's the cost of real food. 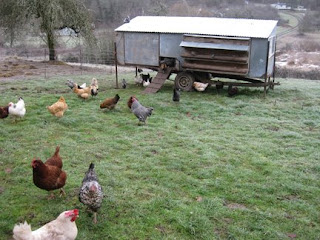 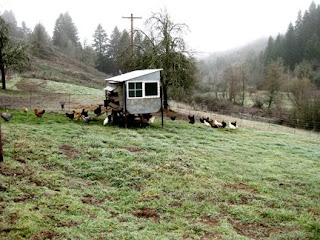 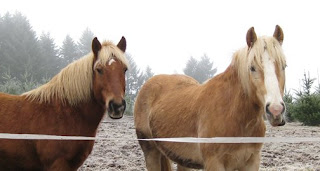 Posted by Clare Carver at 6:36 PM 2 comments: Links to this post 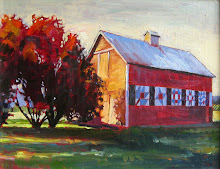 photos in top bar by Christina Teichroew and Clare Carver

Clare Carver
Gaston, OR
Painter, Farmer, Assistant to my Winemaker husband in running our winery, black belt and student of life.